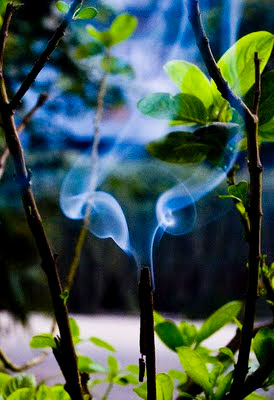 I was raised by a very flexible Hindu family. We didn't go to temples as often. We didn't fast every now and then. We never organized bhajans and kirtans at our place as is customary in many Punjabi families. I took off from there. My visits to temples are now restricted to the times when I really feel like going. I haven't fasted for the past 4 years.
So do I believe in any of the many Hindu Gods? To say that I believe that there is a Ganesh with the head of an elephant and the body of a human being who looks after all our new businesses will be a lie. I don't believe that when angered, Shiv performs a tandav to inflict a pralay on earth. And I don't believe that Vishnu sits on that huge lotus while his wife, Lakshmi massages his feet. But they are interesting characters, never-the-less.
Having said that, I do feel like a Hindu because Hinduism gives me freedom to believe in any power I can bring myself to accept. That makes it easier for me because while I can't acknowledge a human God, I can respect a supreme power. And one reason why I want to believe in a supreme power is because I like to think that there is some order in the universe and there is a reason behind everything. I want to trust that there is some meaning to this life and we are here for a purpose.
There is another reason why I want to believe in God. Because that gives me a right to believe in the spiritual cycle of life. It is very important for me to think that spirits exist  and afterlife and rebirth do happen. It is comforting to know that the loved ones we have lost in this life are out there somewhere, living another life, perhaps happier now than they were earlier. It is a beautiful feeling and something that makes going on with one's life much easier.