November 07, 2011
Humour, art and literature are perhaps the most effective ways to reflect upon a society. A society that cannot laugh upon itself loses out on growth, maturity, and health. While I was in the UK, I got enough opportunities to attend stand-up comedy shows because some of my batchmates from MA were regular performers. Most of the shows were good but they only just met expectations simply because British are known to have a sauve sense of humour so expectations were accordingly high.
Ever since I came back to India, I was desperate to attend a stand-up comedy show in India. The expectations were again high because I've seen a considerable improvement in the standards of our comedy shows on the television. "Tarak Mehta ka Ulta Chashma" and "Lapataganj" are just two examples. I wish the same could be said about our movies.
So when Tanmay tweeted about "Mumbai Meets Dilli" scheduled for 5th and 6th of November in Gurgaon and Delhi, I immediately logged in to Book My Show and after some hassles and expert guidance from Rajneesh, managed to book my tickets and was quite excited for the event.
The show started in an understated fashion with no formal compere. I think that was a smart decision and the whole show had a "Straight-down-to-the-business" approach. The show started with the (comparatively) understated, yet rib-tickling performance by Ashish Shakya. His favorite topics were sexuality, sex, Dilliwallahs, Indians in general. The audience was tuned in and our expectations were constantly rising after this great start.
And then Tanmay Bhat took the stage with his hilarious, energetic and expressive performance. The infamous aggressiveness of Dilliwallahs and our haughty culture of "tu jaanta hai mera baap kaun hai?" were his favorite topics.  By the time, Tanmay finished, we were nearly ROFLing. Then entered, Rajneesh, the only artist from Delhi performing in this show. His sweet Punjabi accent and soft tones made even the most targetted jokes easy to bear. It was ironical that the artist from "aggressive Dilli" was the politest of all performers. He even apologised to the one woman from Mumbai because he had made fun of Mumbai to get back at Ashish and Tanmay. His was also the most opinionated and socially sensitized performance.
The last performance was by Rohan Joshi and he took a dig at the late night Teleshopping shows and Anna Hazare. And even though this was the last performance, the show wasn't over yet. Just as the team was taking the final bow and thanking the "excellent" audience, right on the cue, an aggressive Dilliwallah from the audience shouted "Abey bahar aa dekhta hun tujhe." All of us were shocked but soon burst out laughing when we realized that the person was only joking. A great way to end the show and a great way to show the world that we too have a sense of humour and we too can take a joke or too upon ourselves.
The only aspect that was lacking was that none of the Mumbai-wallah performers made any real joke at Mumbai's expense. That would've been a true testimony of their sense of humour.
I came back home happy and rejuvenated and if any of the four Ashish, Tanmay, Rajneesh, and Rohan are performing near you, don't miss the opportunity. Do go and listen to them take a dig at you inside your own home. There's no better way to spend an evening. 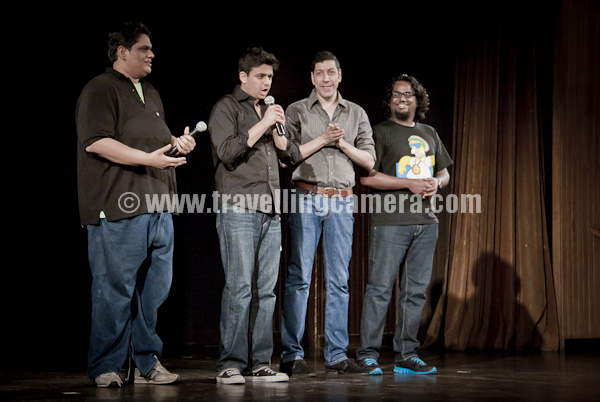 Visit VJ's Traveling Camera for more pictures of the show.