Unusual Rituals - Windows into the Past (Article Published in TOI Jammu)

November 07, 2011
Rummaging through the market to find that one elusive ingredient required for Lakshmi Puja, putting up those flickering, dancing lights to ensure that your house stands out, purchasing those sensational fireworks that light up the sky, and  visiting relatives and friends to exchange those gifts bought at the last minute – yes, we are all caught up in this frenzy! It’s Diwali.


But if you think that the way we celebrate Diwali is wild and frantic, you are in for a surprise. Consider one the traditions alive here in Himachal.  Much after the entire world is moving on after the festival of lights is over, a much darker version of Diwali dawns upon some villages of Kullu, Sirmaur, and Shimla districts. Buddhi Diwali, as it is known locally, is celebrated almost a month after Diwali on the new moon. The revelries involve dancing and singing mantras in tune with the reverberating beats of drums and other local instruments. Hundreds of cattle are sacrificed to appease deities. Gradually, however, breaking of coconuts is being promoted as an alternative to sacrificing the animals.


And when we head south, right on the border of Karnataka and Tamil Nadu, sits a little village called Gummatapura where the villagers celebrate Diwali in the most extraordinary way – by hurling cow dung at each other. They call it Gorehabba. The common belief is that frolicking in tons of cow dung collected near the Beerappa temple cleanses one’s soul and cures the body of all kinds of diseases. The celebrations are so lively that many onlookers from nearby villages gather around to enjoy the event.


Diwali in Darjeeling, though not as startling as Buddhi Diwali or Gorehabba, is still different. Locally it is known as Tihar. The first day of the celebrations is dedicated to the crow who is believed to be the messenger of Yamaraj. The first serving of food is offered to the crow and the family eats only after the crow has accepted the food. The same goes for the dog on the second day. The dog is believed to guard the abode of the Yama. The third day is the most significant day with prayers being offered to Goddess Lakshmi. The cow, believed to be the symbol of wealth, is worshipped on this day. In the evening, young people dress up in traditional attires. Singing devotional songs and dancing in tune with the musical instruments, they go from door to door accepting gifts and food.


In a country like India, it is not a surprise that Diwali is celebrated in so many different ways. What is surprising is that these rituals have existed in isolation for centuries and not many of us know about them. Unlike the traditions in urban India, these traditions have hardly changed at all. They are windows into what Indian society used to be in the yesteryears. Even though practices like animal sacrifice are being and should be discouraged, rest of the rituals should be preserved and cherished like a treasure. 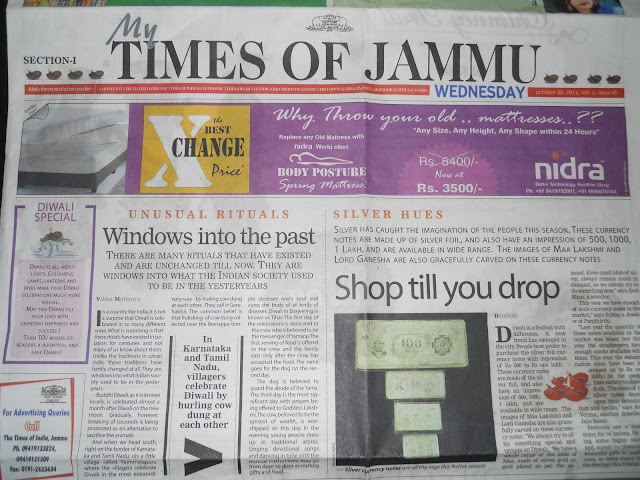