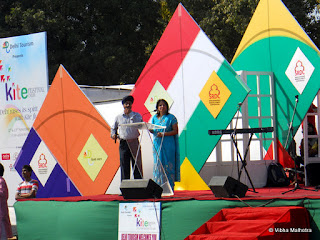 Yes, Lord Hanuman and Taj Mahal were hovering over the Delhi sky and no one was surprised. Yes, no one! Why? Because it was the first ever Kite Festival organized by Delhi Tourism. And Hanuman and Taj Mahal were just two of the many unusual shapes that had conquered the Delhi sky today. Kite flying enthusiasts from many parts of India headed to India Gate to unravel the strings and to let their kites soar. Never before in India have I seen such unique collection of kites even though the tradition of kite flying has been a part of our culture since the time of Krishna. And, to be honest, I was expecting to see more. Lord Hanuman, Taj Mahal, and the Smiley were the only ones that were truly unique at least while I was there. But since this was the first day, perhaps I am being too harsh.
Click here for more pictures of the event, some of them better than these.
Gaining entry into the festival was surprisingly hassle-free and in spite of VIP presence, the participants and visitors did not feel restricted in any way. 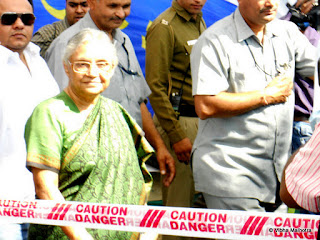 The Festival was inaugurated today by the Chief Minister of Delhi, Smt. Sheila Dikshit, who opened the festival by flying the first kite of the event. After the Chief Minister's opening note, Shayar Mirza Asif enlightened the crowd with some interesting history and patang-related shayari in his speech titled "Dastan-e-Patang". And after that, the band Soul Samvaad performed Mausiki-e-Patang to a very excited and supportive crowd that swayed to the tunes of their Patang Song. The sound system was not the best though and could've been better.
"Jab bhi hawa ke rukh se jo hat gayi patang.
Ya to giri zameen par, ya kat gayi patang."

The Pavilion displayed some interesting designs from Delhi, Rampur, and Jodhpur. Most of the designs displayed there are not actually sold during 15 August Kite Frenzy but are reserved for festivals. There were several kites with traditional Rajasthani prints in the Jodhpur stall. Femira, who was manning the Jodhpur Stall, shed some lights on those. "10 se 20 rupaiye tak mein bikti hain yeh Jodhpur mein." That sounded really inexpensive. If those kites were sold in Delhi, they would cost at least  50 each. I hope many more States and regions join the festival from the next time. It'll be nice to see kites from across India flying in the Delhi skies. 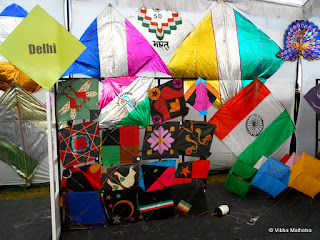 Anyways, moving on, I spotted the Delhi Tourism Stall. They were giving out pamphlets related to tourist spots in Delhi, Maps, and Posters, all free of cost. Mr. Brij Mohan and Mr. Anil Gupta who were managing the stall were polite and eager to offer information about the stall and the festival. I felt that the stall could sell some merchandise such as fridge magnets, pens, post cards, stamps, mugs, and T-shirts etc. They would have found some buyers for sure. 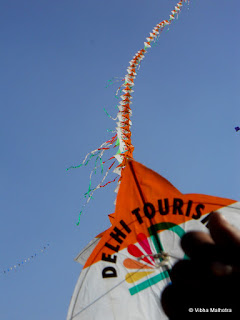 The festivities had started by now and patangbaazs were struggling to get their kites to take off. Kite fliers were there alone, with friends, or with their families. It was a bit congested and a bit more space for each flier would've been useful. There were several people like me who were there as spectators. Meanwhile expert kite fliers designated by Delhi Tourism held on to 150 kites each and steered them easily according to the direction of the wind. These kites were really heavy and when I tried holding one, the string almost managed to lift me from the ground and that is by no means an easy task. Mohammad Sufran, one of the kite flier who was holding and steering these kites told me "Sabse oopar waali kite ko hawa ke hisaab se sambhaalna padta hai" when I asked him whether he could tie the string somewhere and give his arms a rest. "Humein to yeh pakad ke hi khada hona padega." Commendable! 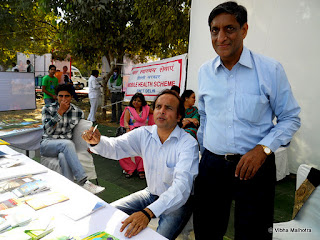 Kites were also being sold at the venue and if you were tempted to fly one yourself, you could purchase kites of all sizes and participate.


By this time, the food stalls by R. K. Caterers were also open. The quintessential Gol-Gappes, Aloo-Tikkis, Pav-Bhajis, Chowmein, Papdi-Chaats were all being sold at prices almost at par with the rest of the market. The stalls looked clean and hygienic.
I came back during lunch though there were many more things planned for the day such as a magic show, a kite-cutting competition, a mini Dilli Haat, and some cultural programmes.
Delhi Tourism promises to have this festival annually along with many other new initiatives. I feel that this is a good move. Such activities will not only rejuvenate our fading traditions but will also help in encouraging tourists to visit Delhi. To the slogan "Delhi raises its spirit with kite flying", I can only say "Amen!"
The festival is not over yet. You can still be a part of it tomorrow from 11 – 8. Hopefully, your experience will be as exhilarating as mine. 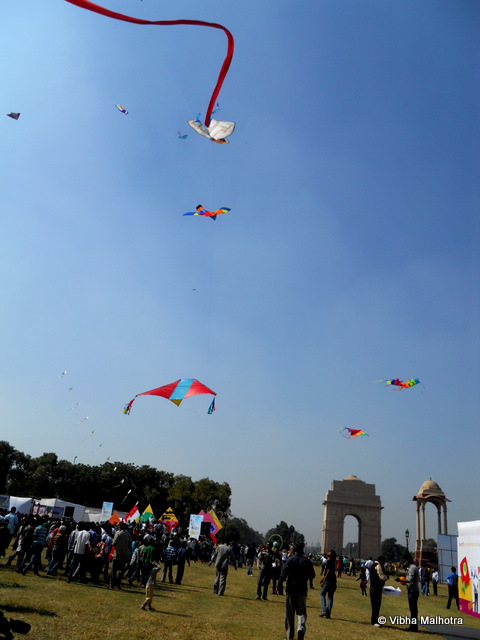