Book Review: Yashodhara Lal's "There's Something About You" 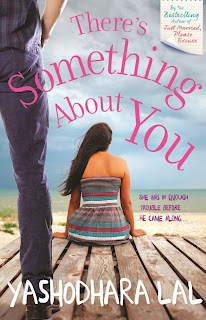 There's Something About You is Yashodhara Lal's third book after Just Married, Please Excuse and Sorting Out Sid, and what we can definitely say about the author is that it is very difficult to typecast her work. In each book she's tried something new. While the first book is inspired by her own experiences of her marriage, the second book sets out on a different tangent altogether - Sorting Out Sid is told from the point of view of a male character and is essentially his coming-of-age story. This third book is again something she has never attempted before - it is a story of a woman in her late twenties with familiar concerns such as career, marriage, a negative body image, and such. Though There's Something About You is positioned as a romance novel, the male lead does not even make an entry for the first 9 chapters. And I find this very interesting because the author is able to draw us in so well that we almost don't miss the hero.

In the very first chapter Trishna, Trish to everyone but her ailing father, is fired from the job she's lounged in for the past 7 years. She has no savings and her parents, especially her father who has Alzheimer's, are dependent on her. To add to her woes, when the going was easy, she had rented a sea-facing matchbox in Mumbai, and is stuck with it now. By some stroke of luck she chances upon a freelance opportunity to write a daily agony-aunt-like column for the same publication she was fired from and manages to make it an instant hit. And Sahil, a man with an unusual gift, manages to sneak past Trish's many defences and make a place for himself in her life as well as that of her parents.

And just when things have started looking up, they slide downhill. She has an altercation with her mother, and she also has a falling out with the only person she call a friend, Akanksha. And also by now, Trish has also started hating the restrictions that are imposed on the way she addresses queries in her column. Thoroughly disappointed and yet stubborn, Trish continues in her set ways until a horrific incident in their colony causes turmoil in everyone's lives. But as the dust settles, things start falling in place and Trish manages to solve the mystery behind what is bothering Akanksha's seven-year-old daughter and uncovers a painful secret about her own family. With everything out in the open, old wounds start to heal and Trish is now able to look at herself in a different light and she now plans to embark on a new career altogether.


Trish, the self-conscious, overweight, and sharp-tongued central character of the story, prefers to merge in the background with her ill-fitting, dull kurtas, but still has enough spunk to smartly give it back to the conceited editor of the publication she works for. The author has managed to get very close to real life here where our defences often end up making us successful, though not necessarily happy. Trish's parents, Akanksha, and even little Lisa, are well rounded, if you can overlook Zee, the editor, and Akshay, Trish's former boss, who are through and through evil, there are a lot of grey characters here. And this is one of the major strengths of the book. One character that fails to inspire though is unfortunately the male lead, Sahil. Quirky and weird in the beginning Sahil holds great promise, but he quickly settles into domesticity and refuses to develop any further.

Another flaw, in my opinion, is that Sahil's special gift enables some of the key mysteries of the story to surface without much effort on the part of Trish. Sahil hints at the mystery and urges Trish to follow through, which she does without too much of a difficulty. And when it isn't Sahil, divine intervention rescues in the form of a vision that all but reveals the mystery of Lisa's condition. It is all too easy, and as a result less rewarding.


While the book does touch upon serious issues, such as caring for an Alzheimer's patient, problems that arise because of lack of communication in a family, the question of blatant materialism in professions that demand responsibility, impact of infidelity on a marriage, and, yes, suicide, it does not really dwell upon them. The focus of the story clearly is Trish and her struggles with herself. In the light of this, it does seem that the book tries to do too much in terms of issues it tries to address, but instead ends up doing too little, so as far as these issues are concerned, the book did not move me much.


Do I recommend the book? If you are looking for a book that is a light read, this book is perfect for you and you should go ahead and pick it up. But if you tend to be a more involved reader, this may be too light for you.