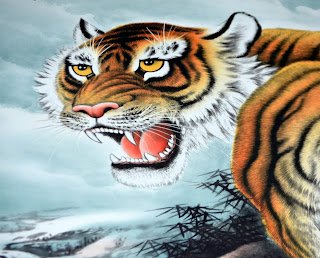 We visited Ranthambore in May 2014. Back then T-24, or Ustad, still roamed the jungle. Forest authorities were fiercely protective of the tiger even though he had already been blamed for the death of three people by then. "He is NOT a man-eater!" countered Mr. Yogendra Kumar Sahu (the Conservator of Forest & Field Director), when one of our fellow bloggers referred to T-24 as one. And from what we had heard from the people who work in the jungle, the safari guides and forest officers, everyone was in awe of this magnificent beast. "I saw T-24 today," someone who had chanced upon the tiger would proudly proclaim. The tone was that of pride and respect. There was no sign of any hatred or indifference anywhere. We felt reassured that tigers, including the ones that are more tigerly than the others, were safe in Ranthambore. During our entire trip, though we weren't fortunate enough to sight T-24, its presence loomed large on our breakfast discussions, our safaris, and our dreams.

And then in May 2015 came the news that Ustad had attacked and killed yet another forest guard barely 100 metres from the park entrance. After some initial reluctance, the magnificent tiger was moved to Sajjangarh Biological Park. Social media erupted in outrage. T-24 was being persecuted for its natural instincts, some cried, while others claimed that there was no solid proof to tie T-24 to the crime. It was easy to get swayed by all the sentimental rooting for the tiger. Fingers were pointed in all directions - towards the hotelier lobby for being the reason why the tiger was shifted out of the forest and at the forest authorities for carrying out the operation covertly. Some felt that the tiger was being victimised, while others felt that the decision to shift out the tiger was a prudent one and was carried out for the greater good of conservation.

I have so far found it difficult to take sides in this debate. While I would love to live my life knowing that T-24 is free in its natural habitat and its ferocious roars still echo through the jungles of Ranthambore, I cannot bring myself to doubt the intentions of the forest authorities, people I had the good fortune of meeting and talking to, people who so passionately defended T-24 against the stamp of a "man-eater", people who carried on with their duties fearlessly for years in full knowledge that a tiger who has been known to kill people might be lurking behind the bushes. I refuse to doubt compassionate people who seal routes in the jungle to shield a tigress with newborn cubs from prying tourist vehicles, a decision that some conservationists do not agree with. I cannot bring myself to question their dedication to the cause of Tiger Conservation.

I have, however, often wondered what caused the forest authorities to lose their faith in T-24, what shattered their confidence, what caused the forest guards to threaten to stop patrolling the sanctuary unless T-24 was removed. Before we start judging these people, we need to remember that this is the sanctuary where tigers have wonderfully bounced back, that now houses more than 60 tigers. But at the same time, we need to be informed that this sanctuary is perhaps the most lacking in discipline as far as tourist behaviour is concerned. Anyone who has been to Ranthambore would probably have witnessed how uncomfortably close tourist vehicles are allowed to get to the tigers. So while I do not doubt that the forest authorities only relocated T-24 to Sajjangarh Biological Park to protect it and rest of the tigers in the wildlife sanctuary, I do hope steps will be taken to rein in the uncontrolled tourist activities as well.

The question of Tiger Conservation has to be larger than merely the number of tigers in the wild. It has to encompass the health of a tiger's habitat and the safety of wildlife and human population in zones where there are high chances of human-wildlife conflict. Tiger conservation has been brought into the mainstream thanks to the conscious, consistent efforts of organizations such as Sanctuary Asia and Aircel. However, the cause of conservation, though rooted in emotions, needs to be pursued with practicality, and if in the larger interest of tiger conservation, one tiger needs to be relocated to an enclosure, then we may just need to control the urge to unleash our injudicious outrage upon the forest officers who have dedicated their lives to the cause. It may be time to look at the larger picture for once. It may be time to trust the decision of those who have worked so hard to help revive the dwindling tiger populations.