Extraordinary Light - A Review of Shimmer Spring : Prose and Poetry 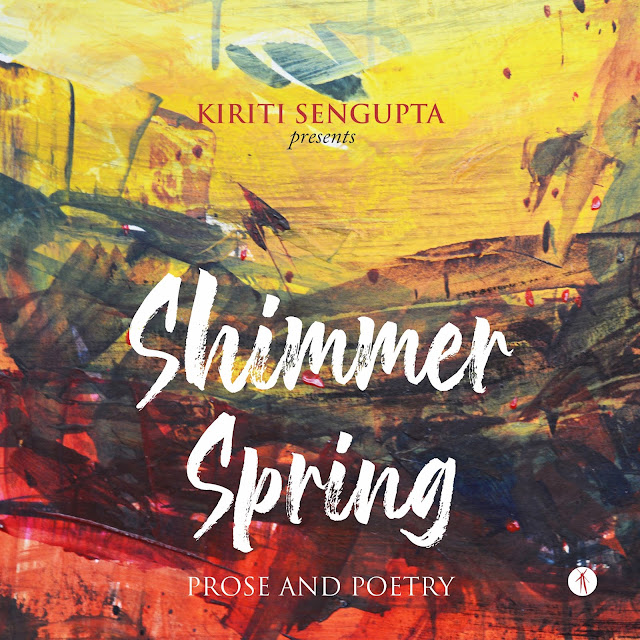 Hope, the entity we desperately try to hold on to in these unusual times of loss and repatriation, is light, some would say. And yet, the light also reveals the desolation and destruction. What is light then? Is it the beacon, or is it the whistleblower? In this context, Shimmer Spring, published by Hawakal Publishers (New Delhi & Calcutta), is an extraordinary collection, embracing both the temperaments of light. This hardbound volume—presented by recognized poet and editor Kiriti Sengupta, designed by Bitan Chakraborty, and embellished with vivid and fluid paintings by Pintu Biswas—is as enticing to the mind as it is to the eyes.

In his introduction to Shimmer Spring, Sengupta states, “light is a common metaphor for all that is good, illuminating, enchanting, truthful, or exuberant.” American poet Dustin Pickering grasps the overarching philosophy that Shimmer Spring explores. In his review, Pickering observes, “Writing about enlightenment is a precarious event. One must have a sufficient understanding of the breadth of meaning. Enlightenment is a state of mind and being rather than a momentary eclipse—we are granted access to its furtive sorcery from time-to-time.” Referring to Shimmer Spring as a “glowing mixtape of art and poetry,” journalist and poet Sneha Bhura identifies the collection as the kind of light that can offer solace in the times when most of us are “mostly groping in the dark.”

“There are two kinds of light / at work always,” says Akhil Katyal, one of the contributing poets. Be it the tsunami-like light of the Sun that travels far and wide, leaving destruction as well as creation in its wake, or the subtle glow from “A firefly / —with his 3mm bottom—” that triggers a butterfly effect to make “a whole forest talk.” For Basab Mondal, light is also the mark of genesis, briefly anointing a pregnant moll, accompanying her “like a halo / while she walks through the mist.” For if you have light within, you cannot but exude it.

Light brings about transformation, as Anannya Dasgupta discovers in “At Lucknow Residency.” The “slanting light / of the evening sun” reveals the ephemeral perfection in “exposed brick wall / broken archway / ruined banquet hall,” and what was earlier thought to be “the heartbreak / of its former self” is found to be alive still. Right, then, are the artist and filmmaker Aaron Rose’s words, “In the right light, at the right time, everything is extraordinary.” Even the ordinary. And this is one of the biggest lessons the current times have taught us. It is the mundane that we miss the most when times change. It is the routine that gives us comfort when nothing else remains.

One must remember that while light begets life, it is also a pulsating, spirited being in itself—disembodied at times, like the ruminations of a poet in deep reflection. Geetha Ravichandran observes this spectral light as “it stood above the heads of the trees. / Shimmer nestled / amidst the flock of birds, / sailing in the dusk.” The same light, when absent, can incarcerate physically as well as philosophically, as it does in Anu Majumdar’s “Seed,” where “the jailers are now in jail / in the darkness of their mind.” Sonya J. Nair aptly seals this thought in “Past Holy Cities” with “Feel / an acute lack of light. / Two trees—casualtrees. Fell.”

Jagari Mukherjee’s “Again” explores light from an unusual perspective—heartache expressed through poignant imagery. After all, when light exists only in memories, sometimes the most comfortable choice is to live in the denial of its absence. Thus, “yearning is a shimmery moon / seen through nets of rain / when the world is a / devastating storm of watercolors.” The poem ends with an ominously misplaced sense of control over one’s destiny with “Everybody tells me to forget you, / but I won’t listen. / I will meet you again.” Mukherjee leaves the readers with a sense of foreboding because we know that while our actions might be ours, we have no say whatsoever in the outcome. After all, as Basundhara Roy observes in “Reflections,” “Love lost, the story splits into a hundred / nameless bits spinning like dust motes in // memory’s beam.”

While Mukherjee traverses transience through vibrant colors, Usha Akella chooses sepia in “My Father Sings,” when “from his shy mouth, emerge winged things— / Hindi songs testing flight in the darkness, / the songs flicker their wings / waning and waxing on an underwater / of too many denials in life.” Nostalgia’s restrictive palette still effectively serves as a spotlight on those fleeting memories that we never thought would endure, and yet they somehow do. Madhu Raghavendra’s “Lost and Found” latches on to these illuminated moments of hope, prompting the poet to “think / of the pillows under which” he may have “forgotten his happiness.”

Sudeep Sen’s “Hope: Light Leaks” oscillates between light and the absence of it, as “Light’s plane waxes, wanes — / viral load expands, contracts. // Photons spill, conduction sparks — / light slow removes cataract’s veil.”  And Tabish Nawaz concludes this struggle, as “Darkness sips drop by drop— / stealing from a boisterous bulb—a glimmer of gold. // Light— / resting inside the puddle—incapable of hiding. / Springs to shimmer.” For no matter what, light must triumph. There is little sustenance in darkness. We give up on life if we give up on light.

I conclude this review with this astute observation by the late American author James A Michener: “An age is called ‘dark,’ not because the light fails to shine but because people refuse to see it.” One can argue that light is life, and even in its absence, it must continue to exist, lurking at the horizon. In that sense, metaphorically speaking, Shimmer Spring is light itself—reflecting on the current times, inspiring dormant poets to write, triggering a chain-reaction of creation that is bound to transform the emerging dawn into a bright and sunny day.