Does this image make you uncomfortable? 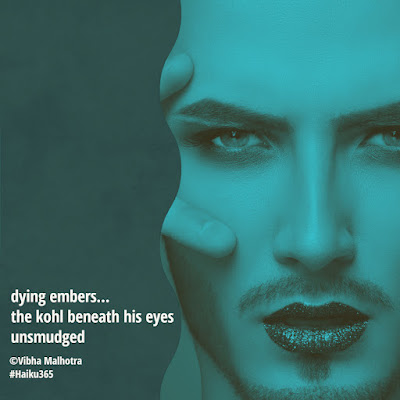 There's a reason why I started writing this blog at 4am in the morning. I was woken up by the deep philosophies Vijay sometimes mumbles in his sleep. And then I made the mistake of picking up my phone and checking email. I had submitted the following Haiku for critique on one of the forums:
dying embers...
the kohl beneath his eyes
unsmudged
The poem elicited starkly contrasting opinions. While some were offended that I chose to use "unsmudged", instead of "not smudged", other objections were far more existential. I will get to those objections in a second, but let me dwell on "unsmudged" for a minute. According to many traditional dictionaries, "unsmudged" is not a word at all, and even as I am writing this post, blogger is diligently putting red squiggly lines underneath "unsmudged". Blogger too is trying to bring this poem in line with traditional language, so why should biased, opinionated human beings be any different? But "traditional" isn't what I was going for with this poem.
With this poem, I was wondering if I am too late to enter the conversation around gender stereotyping. But I would soon learn that it is never too late. While some reviewers felt that the use of "his" instead of "her" had elevated the poem, others felt that I should dial it down a notch by using "her" instead of "his". To put it simply, some reviewers felt that since men do not commonly apply kohl, and this was not an image that they could relate to, I should change the pronoun to "her".
I don't know why but upon reading this feedback, I suddenly felt very claustrophobic. It isn't that I am not comfortable with feedback. On the contrary, I often revise my poems because someone happens to suggest a better rewrite or schools me for my lack of knowledge of the technique. I am here to learn, after all. But this comment suddenly brought me face-to-face with the everyday struggles of those who do not conform to traditional stereotypes of gender.
"Men don't wear make-up. Go wash your face."
"Men don't cry. Go wash your face."
"Women shouldn't be loud. Lower your voice."
"Girls shouldn't be near a funeral pyre. Move back. We are only trying to protect you."
The last one is from a personal experience at my grandma's funeral.
I was born with a strong sense of equality of genders (not superiority, but equality) into a middle-class Punjabi family. My parents broke the stereotypes in many ways - not going for a third child after two girls, giving us the best of opportunities, teaching us to be independent thinkers. But I was surrounded by well-meaning aunts and uncles, who were worried "Iska kya hoga?" I was strong-willed, not afraid to speak up even when children's opinions were not sought. Feisty. Yes. And we all know that Feisty doesn't do well in traditional set ups.
There is one particular scene that I remember clearly - my family was discussing the future of an aunt of mine who had constantly been abused by her husband. Her neighbors would call us up to report that he was choking her. She ended up in hospital several times. And had finally lodged a complaint against him with the police. And yet, here we were, discussing whether she should go back to him. She was not being asked for her opinion, so of course children of the family commenting on the matter was out of question.
But I spoke up, for her. I asked my family, "why should she go back to him if she doesn't want to?" And I was immediately asked to shut up. "Bachche nahin bolenge." I remember the exact words. But I did not shut up.
My aunt passed away a few years later. Having stood her ground on her decision to separate from her abusive husband, she was a brave woman. Much later, I wrote a short story dedicated to her, titled "Cactus".
So yes, as a feisty girl / woman, I have often been asked to fall in line. And this comment felt exactly like that. May be I am overthinking. May be I am being too rigid in my own way. But for how long can we afford to stay blind to the changing definitions of gender? Despite the fact that the LGBTQ community has made the world so much more colorful, we choose to look away. Despite their centuries-old struggle, we still don't acknowledge their existence.
I do hope that at least poets realize that the point of writing poetry, or of any other artform for that matter, isn't to bring forth the images that are common or relatable. In fact, it is the exact opposite. It is the moral responsibility of artists to expand the world for consumers of art - to front brave ideas, to start the conversation around alternate realities.
So when you come across an image that makes you uncomfortable, dwell on it for some time and ask yourself why. You may find yourself face to face with some bias that you never knew you had. Other realities won't cease to exist simply because you aren't comfortable with them, but it would definitely make the world a more pleasant and fun place if we were to allow them to exist in peace.